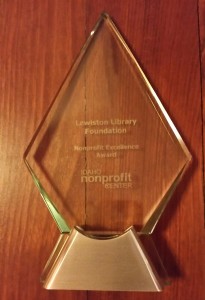 In 1977, the Lewiston City Library moved into a temporary space – a former hardware store with one wall shared with a bar. Fast forward through years of searches for a permanent space, failed bond issues and then, under the auspices of the Lewiston Library Foundation, a massive collaboration between individuals, businesses and city officials we opened of the doors of our new library in June 2103.

“The Library Foundation Board is thrilled that their efforts and those of Lewiston citizens, businesses and the City Council have been recognized statewide,” said Marcia Banta, President of the Lewiston Library Foundation. “We are especially proud that the funds came from hundreds of donors, large and small and a partnership with the City.”

“To receive recognition in the first year of the award, from among 108 wonderful nonprofits statewide is particularly rewarding,” said Banta. “The beautiful glass trophy has a place of honor at the brilliant new Library. It is sure to inspire the Foundation and the City as we pursue finishing the second floor portions of the project.”

The Foundation was instrumental in developing the City-Business-Citizen-Foundation partnership that allowed what was a long deferred dream to become a reality. Our willingness to raise a matching portion of the funding was the impetus for restarting and reimagining the possibilities for a modern Library and inspired the City Council to set aside designated funds even in a time of economic uncertainty. The Library Foundation provided the funds to match and then double the City’s contribution.

“Really,” said Banta, “this is a celebration of all Lewiston and their work to fulfill a dream. We plan to move forward from here.”